(all February 2010 news updates are combined to one entry below)

Here are four new reviews of Hypnos and Hypnos Secret Sounds discs, by
Textura.
The text of the reviews appears below, with cover graphics inserted because people like cover graphics!

Four new releases from the Hypnos camp, three of them very much ‚Äòin the tradition’ and the fourth a surprisingly noisier recording. Regardless of individual
differences, they’re all quality releases, much as we’ve come to expect from the label. 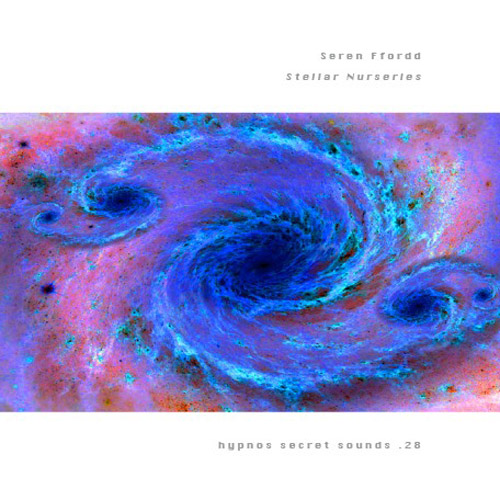 Let’s start with the earliest of the four, Seren Ffordd’s Stellar Nurseries, which is actually a reissue of a 2004 release (the first in a planned series of recordings
previously issued on Umbra and Penumbra, Italy-based labels managed by Oophoi) he created using a Korg 016 and a Yamaha PSR 262 keyboard. It’s an hour-long,
single-movement work that the Wales-based Ffordd splits into four figurative sections: ‘Out of the Void,’ù ‘Storm Movement,’ ‘Spiral Dance,’ù and ‘Floating, Dreaming.’ù
By way of context, the artist’s notes describe huge, drifting clouds of molecular gases that turn star-like, then gradually increase in heat and movement until ignition
occurs, after which lighter and heavier elements are pushed and pulled by gravitational forces until planets form. There’s a suspended and drifting quality to the
material, with cloud-like washes and tones extending for minutes at a time like massive exhalations taking place thousands of kilometres above the earth or perhaps
nebulae coming into focus in slow-motion. Shifts in emphasis alternate between the rumbling lower to ascendent higher tones, and wave-like surges in intensity
occur too, lending the material an industrial character in the process. An undercurrent of controlled aggression and pressure dominates the first half, until an
abrupt termination strips the material down to a sole, organ-like nucleus around which synthetic tones languorously congregate as the sound mass thickens. In
contrast to the first, the mood of the second half is lambent, serene, and melancholy, rather requiem-like in spirit as if in mourning for the death of a star. Ultimately,
the programmatic connections between the section titles and the work itself are easily drawn in Ffordd’s beautifully sustained meditation. 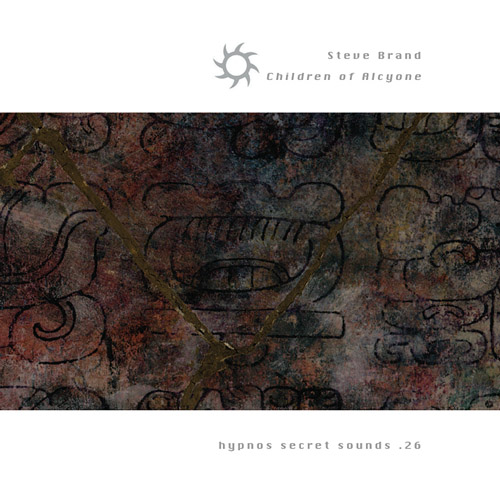 A supra-terrestrial theme also runs through Children of Alcyone, the second release by Steve Brand (who’s also issued recordings under the Augur name) to appear
on Hypnos Secret Sounds. The inspiration for the work came from the writings of Barbara Marciniak whose books supposedly channel information from the Pleiadians,
distant ancestors of ours from the Pleiades constellation (Alcyone, incidentally, the name of the constellation’s ‘central sun’). Initial sound sketches for the recording
were produced in September 2007 during a master class taught by Steve Roach and were refined subsequent to it at Brand’s studio. The material on Children of
Alcyone is minimal, even simple, by design but is alluring nonetheless. Lonely tones whistle to one another across immense expanses, and a melancholy spirit
shadows the four calming meditations. A brooding epic of long tones and ringing percussive flourishes, ‘Outside the Grid of Time’ forcefully draws the listener into its
murky depths, but the recording’s coup de grace is the stirring ‘Light Age’ where minimal synthetic tones unfurl gracefully for an entrancing twenty-three minutes.
Showing a deft and pitch-perfect touch, Brand skilfully weaves the elements into hypnotic form, never hurrying the material along nor slowing it down too much either.
The result is that rare thing: ambient music that’s both artful and moving. 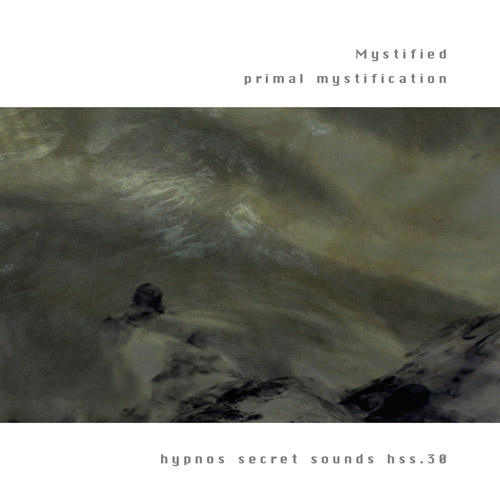 The fifty-minute Primal Mystification is the first release by Mystified (aka US ambient-electronic musician Thomas Park) to appear on Hypnos Secret Sounds. Park is
no novice, as he’s collaborated with artists such as Nunc Stans (One Thousand Dreams, Dataobscura), Robin Storey (Rapoon), and Nigel Ayers (Nocturnal Emissions).
The four tracks on Primal Mystification are restrained in character and induce a state of calm in the listener‚Ä”which isn’t to suggest they’re uneventful, as there’s lots
of activity and detail on display. Likening the mercurial drone sounds to the emergence of human beings from the ‚Äòprimordial ooze,’ Park shapes minimal elements
(some of it created from field recordings) into ten-minute-plus settings of placid design using ringing ambient washes, willowy synthetics, elemental percussive
patterns, and simple melodic phrases voiced by piano. In ‘Massive Turning,’ù elegant piano playing drapes itself across long-form droning tones anchored by a gently
swinging rhythm track made up of acoustic-sounding percussive elements (hand drums, bells). ‘Departing Certainty’ exudes a ghostly, even tribal quality in its
crystalline swirls and cavernous rumble, while both ‘Not Knowing Where,’ its nocturnal whistling tones animated by a midtempo rhythm track, and ‘Back to the Primal,’ù
its ethereal shimmer augmented by Eastern-sounding percussive pulsations, are energized by comparison. 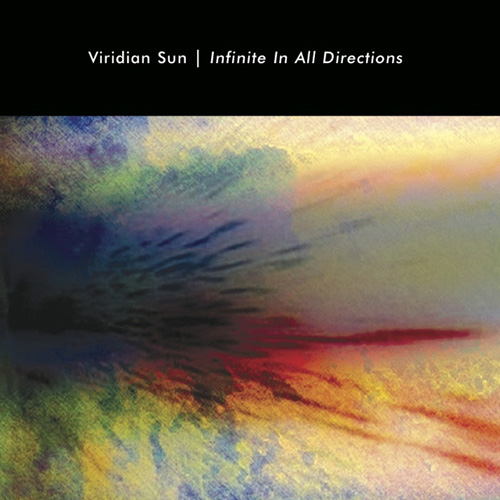 The relative wild card of the four, Viridian Sun’s Infinite In All Directions is a different animal altogether. The group itself is a joint venture into abstract improvisation
involving Hypnos founder Mike Griffin and Hypnos solo artist David Tollefson, whose last Viridian Sun album, Perihelion, appeared a decade ago. Eschewing
synthesizers, Griffin and Tollefson build the album’s seven tracks from electronically treated and looped guitars, basses, and percussion. On the surface, there’s
not a radical degree of difference between Viridian Sun and the other artists in terms of sound-tones stretch out as extensively on Infinite In All Directions as they
do on the other recordings, and Griffin and Tollefson also shape their base elements into sustained drones but in a number of pieces the elements themselves are
often harder-edged and swell to more extreme levels of intensity and aggression (check out the industrial guitar squalls that blow through ’40 Hz Emergence’ as an
example in a way that’s a tad reminiscent of Steve Reich’s Electric Counterpoint too). The material also often exudes a trippy character that verges on psychedelic
or phantasmagoric. At certain moments, for example, ‘Four Times I Slept For A Year’ becomes an almost kosmische musik-like exercise when cycling elements
pulsate to psychotropic effect. Elsewhere, sheets of metallic sound surge during ‘Magnetars Cast No Shadow,’ and phantom guitar drones spiral through ‘Light Years
From Here.’ The rawness of Viridian Sun’s attack may give Infinite In All Directions a visceral edge over the three other recordings, but again it’s all quality stuff that
more than enhances Hypnos’s reputation for distinguished soundscaping.

Our thanks to Textura for the quad-review!

Latest batch of imported CDs from Oophoi (and some associated Italian ambient artists) just added to the
Hypnos Store today.

We’ve wanted to put one of our favorite Jeff Pearce albums back in print for a long time, and it’s
finally here! 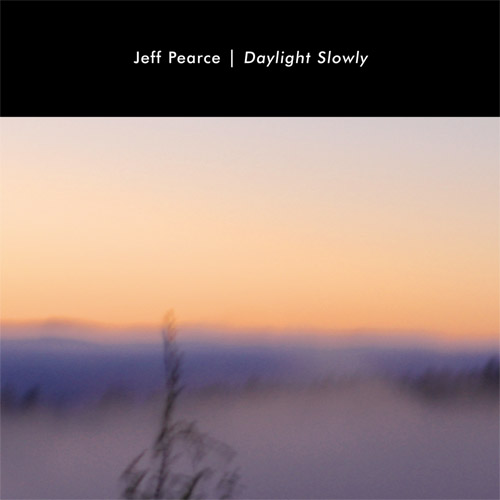 2010 reissue of Pearce’s first Hypnos album, out of print since 2002. Many Jeff Pearce listeners
missed this original release, and may have wanted to catch up on this wonderful collection of
early Jeff Pearce guitar ambience. Pearce has moved on to a more direct and musical (as opposed
to ethereal and absctract) direction in recent years, and uses a Chapman Stick now rather than an
electric guitar, so if you miss the earlier work in this style, give this a listen. We even
replaced the old-fashioned Real Audio samples with ultra-modern new MP3 sample clips!

Examples of praise for the first release:
“Best of the year list.”

“The most “romantic” cd of Hypnos Label. Has a strange light and a sensation of time slow-down…”

We just received a bunch of extra copies of the Saul Stokes album Abstraction…
so VERY many copies that we’re going to drop the price (with Saul’s approval). It was
$14.99 originally, $12.99 when the Green House label shut down, and we’re offering these
last copies on the
Hypnos Store at the very attractive
new price. Here’s the direct link to
buy Abstraction for $9.99. 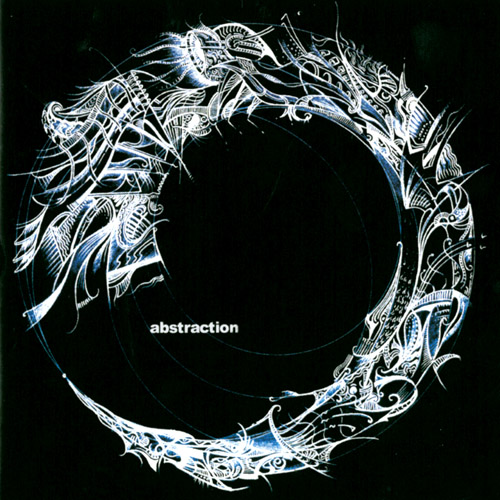 Just received the discs for our long-awaited reissue of Jeff Pearce’s out of print first
Hypnos release Daylight Slowly. We’ll be assembling copies and making the CD
available on our Hypnos Store very
soon.