Thanks to Bert Strolenberg of the review site SonicImmersion.org for this new review of The Martian Chronicles by Oöphoi and Seren Ffordd.

“The Martian Chronicles is a 74-minute longform album inspired by Ray Bradbury’s short science fiction story by the same name. It is the first collaborative album between Oöphoi (aka Italian drone expert Gianluigi Gasparetti) and Welch soundscape composer Seren Ffordd (aka Andy Benford).

What we got here is a deep and immersive work of cinematic ambient that took about three years in the making. The seven tracks feature vast, dark and slow morphing drone textures along field recordings and percussion, making up an intense trip into a mysterious and alienating world with psychedelic edges.

The Martian Chronicles is a spacious recording meant for deeper and focussed listening, that seems to submerge the listener even more when heard with a good pair of headphones. If you’re into dense ambient art works with both subtle changes along fine environmental sounds, this quality album is for you.”

Purchase The Martian Chronicles for $12.99 on the Hypnos Online Store

Our second-to-newest Hypnos release, The Martian Chronicles by Seren Ffordd and Oophoi, has received some positive reviews. If you’d like to order the CD, you can follow the link at right (just click on the cover), or go here.

“Two drone purveyors are unlocking the gateway of the Void, enter now!!!

Seren Ffordd, in Wales based drone master, has released since 2006 several albums and EPs on Oöphoi’s Umbra and Penumbra labels. Now teamed with the Italian drone king for their first collaborative work, “The Martian Chronicles”, on Hypnos, where both artists have released several albums (Seren Ffordd on Hypnos Secret Sounds). Sculpted during 2006-2009 and inspired by Ray Bradbury’s short science fiction story from 1950, “The Martian Chronicles”, released in October 2011 and packaged in attractive 4-panel digipak, is an adventurous and deep sonic exploration merging the talents of Andy Benford aka Seren Ffordd and Gianluigi Gasparetti aka Oöphoi. Nearly 15 minutes long overture, “The Long Years”, opens this grandeur voyage with colossally deep drones with invading bells, gongs and extraterrestrial-infused rumblings and resonations. A truly immense soundwalls designed for all aficionados of ultra deep, massive ambience, magnificent!!! With the next, again 15-minute composition, we dive straightly into a chasmic void. “Dead Cities” are painted in the first half with extremely freezing drones and mechanized breathings climbing into the throne of drones, while in the second half the breathings slowly dissolve and some, rather distractive and ominous effects step into the fore and color this ultimate giant drone wizardry. This is stunningly stellar and powerful sound sculpting evoking wonderful sense of spatial emptiness!!! “Blue Fire”, another longer piece, keeps on the more active, emerging route, where assorted, mostly otherworldly, at times oddly sounding effects and outbursts enrich the drone. Also few recognizable sounds can be heard, for example something like a trot of a horse. “End Of A Changeling” is shorter, eclectic piece featuring extracts from each track, cut and mixed. “Canals” opens with watery and distant storm sounds that support more free floating drifts, quite relieving and relaxing when comparing to preceding adventurous sonic alchemy. The next composition, “Flamebirds Waiting For The Storm”, as its title tells, is flavored with processed bird calls, later the rain and thunder shake the heaven to achieve the most organic environment. Deeply echoed, slow-motion drones with occasional rumblings escape into the darkness of sinkholing “Unremembered” and provide the closing part of this truly absorbing and fantabulous sonic mystery and mastery. “The Martian Chronicles” is purely transcendental listening experience!!! Two drone purveyors are unlocking the gateway of the Void, enter now!!!”

“‘The Martian Chronicles’ by Seren Fford + Oophoi, apparently inspired by Ray Bradbury’s story collection of the same name, is a haunting and deeply immersive sonic voyage to multiple alien worlds. While certainly evocative of the Martian setting, TMC is just as easily placed closer to home, say, in the romantic lost cities of ancient Mesoamerica or the Central Asian Silk Road; or even within the microcosm of our own minds, in the uncharted bottomless regions of our unconscious, peopled by numinous forces and archetypes, beings as foreign from our normal selves as the remotest galaxies.

Since I’m unfamiliar with Bradbury’s work, I enjoy the music best with a sort of visualization.

For example, as the music starts, let’s imagine ourselves transported to a bleak wind-swept land/mind-scape (Track 1 – The Long Years). In the wind’s furious howls, we make out voices: murmurs(?) or incantations(?) in an unknown vanished tongue.

When the wind dies down and the dust settles, we see the crumbling fantastic architecture of great cities, the ruins of a civilization long forgotten (Track 2 – Dead Cities). As we touch the decaying walls, we feel like walking in a dream or witnessing some secret shamanic vision (Track 3 – Blue Fire). The voices are growing louder; the buildings are taking on a newer sheen. The silent cities are coming back to life!

Night falls; the shadows stretch and disappear into the darkness (Track 4 – End of a Changeling). The weird vision continues, bringing back long-gone sounds and memories, the unfamiliar ghosts of the vanished people (Track 5 – Canals).

Suddenly, our trance breaks. It was just an illusion after all. This world is long dead. Its only inhabitants now are grotesque bird-like creatures that watch us threateningly from the collapsing roofs (Track 6 – Flamebirds Waiting for the Storm).

Yet why do the faces of these beasts bear mournful, almost human expressions? Are they perhaps reflecting on life’s brief span, on the vanity of existence and power, as if too much fallen glory had softened even their brutish hearts? No, the noxious alien atmosphere is just playing tricks on our sensibilities. This world died long ago (Track 7 – Unremembered). If there had been any mourners, they didn’t have long to await their turn.

End of visualization. Well, you get the idea now. ‘Mars’ is not a planet, it’s a state of mind. The setting could really be anywhere strange and special to your imagination. Wherever you find yourself, TMC, this ambient masterpiece, will work invariably well.”

–Review by JLP on amazon.com

It appears I mistakenly ended the special $8.99 deal for Seren Ffordd & Oophoi’s THE MARTIAN CHRONICLES too early. Apparently I misunderstood my own email announcement!

For those of you who ordered during the brief period yesterday when I re-set the price from $12.99 to $8.99, we’re reducing your charge by $4 to adjust for this. The price on the store has been restored to $8.99 through today, when it returns to the long-term price of $12.99. Sorry for the error!

Our latest Hypnos CD is available today, and we’re going to repeat the special offer we tried last time with the release of Intangible. Although this new CD The Martian Chronicles will be priced at our usual $12.99, we’re offering a very special deal. Now through Sunday Oct 9, only through the Hypnos Online Store, get The Martian Chronicles by Seren Ffordd and Oophoi for just $8.99.

The links below say $12.99 because that’s the long-term price, but click through and you’ll find the deal available on the store.

The Martian Chronicles, inspired by Ray Bradbury’s story collection of the same name, sounds very much like the soundtrack to a mysterious and strange science fiction film that exists only in the imaginations of Seren Ffordd and Oophoi. These seven tracks, while slow, moody and at times weirdly alien, also evoke a drama and emotional depth absent from much recent ambient music. It’s a complex and beautiful mixture of electronic instruments, field recordings and percussion.

These artists will both likely be familiar to Hypnos listeners. Seren Ffordd has released several albums on our Hypnos Secret Sound imprint, and also contributed to the Hypnos compilation Sounds of a Universe Overheard. The name Seren Ffordd (real name Andy Benford) is Welsh for Star Road, Way of Stars or Milky Way.

Oophoi himself released Athlit in 2002, Distance to Zero (with Paul Vnuk) in 2006, and his Nebulae group project album Path of White Clouds in 2011, all on Hypnos. Gianluigi Gasparetti, the man behind Oophoi, first became known for creating the excellent Italian music periodical Deep Listenings. His Oophoi persona burst onto the ambient music scene in the late 1990s and quickly became one of the most talented and prolific sound artists around. He founded the now-defunct labels Umbra and Penumbra, which released the earliest recordings of Seren Ffordd. After working together in this capacity for several years The Martian Chronicles is their first collaboration, but not their last; the pair has already completed another full album worth of material.

We at Hypnos are proud to bring you this collaborative work from two of the most interesting and talented ambient musicians out there, and we hope you’ll enjoy it as much as we do. 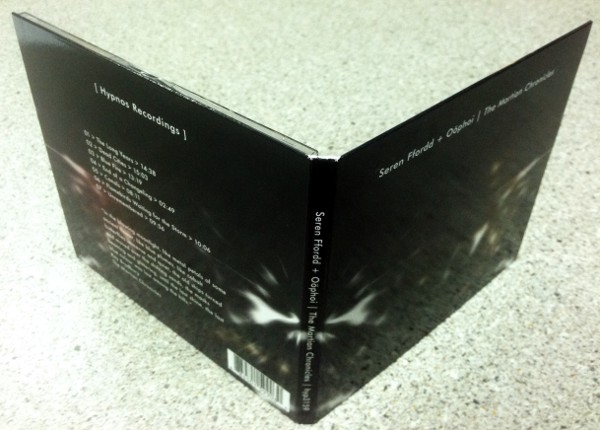 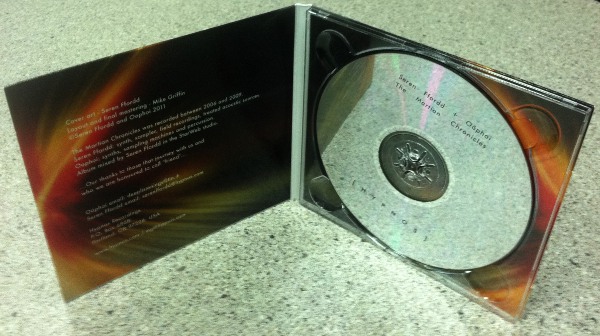